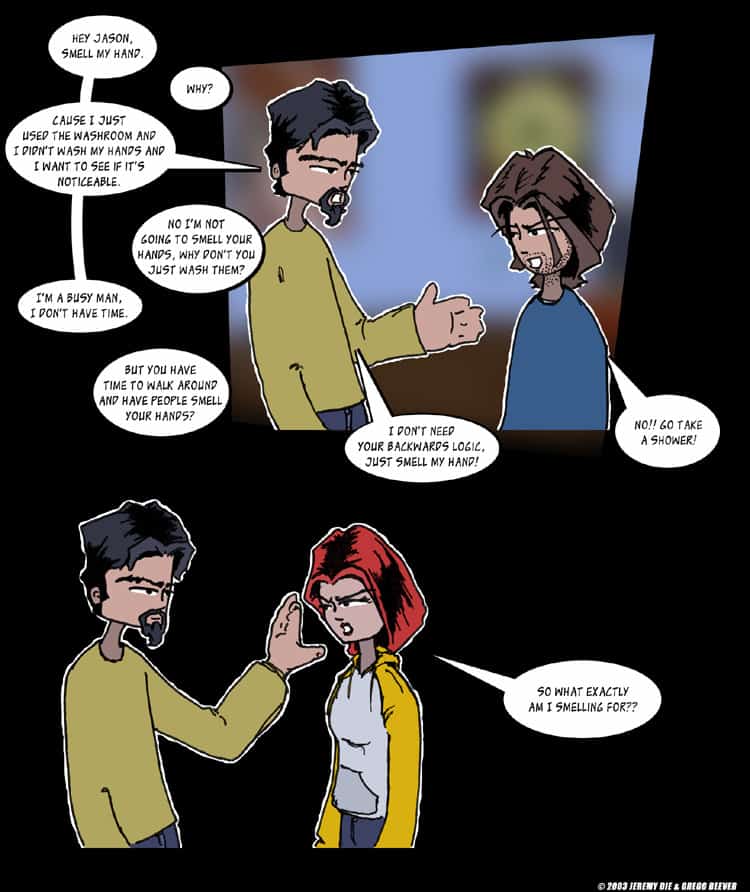 This is about the point in the Dead-Beef run (see comic below) where we started to really play around with the structure of the panels to varying degrees of success (or failure, if you like). I always had trouble finding a “look” to the panels that I liked, and that extended even into Inglorious Hipsters. If you read through the Inglorious Hipsters archive you’ll notice the panels shift in size and shape.

Originally I modeled Inglorious Hipsters after HijiNKS ENSUE, one of my favourite web comics. The tall panels allowed plenty of room for speech balloons, which seemed logical given how wordy our comics tends to be. The problem, however, was the analogue genesis of the line art (yes, the was most pretentious way I could think to describe it). Jeremy draws each panel freely on an 8.5″x 11″ sheet, there are no borders to confine his drawings to the tall narrow panels I would eventually layout the comic in.

We aren’t real cartoonists, not yet anyway. Some day, maybe. But until then we’re just guessing and testing until we get it right. Dead-Beef went through massive changes during its run, as you can see below, which taught us a lot about how best to structure a comic strip. We’re still learning, the changes are a bit more subtle now as we refine and refine, which I take as a sign we’re improving. You’ll notice now the panels for Inglorious Hipsters are much more square, a ratio that better suits Jeremy’s art, not to mention keeps the comic physically smaller and quicker to load.

I also like to think as we move along we’re writing better jokes, but I’ll let you be the judge of that.

Have a good weekend!